A new report published by Public Policy Projects (PPP) at COP26 sets out recommendations on how to ‘maximise COP26’ through sustained investment in hydrogen and nuclear power.

The report calls upon nations to produce National Hydrogen Plans, and recommends that international agreement be sought on reforming regulations on hydrogen. This will help ensure that the existing ‘rainbow colour’ definition of hydrogen (where sources of hydrogen are broken down into colour-coded variants) is replaced by a taxonomy that better reflects the carbon emissions content of hydrogen produced.

The report’s authors also argue that hydrogen must not be placed in competition with other renewable energy generation but should instead be viewed as a compliment to existing technologies. Hydrogen, therefore, ought to add to investment in the expansion of renewable infrastructures.

The report also makes the case that nuclear power not only be taken seriously as a source of clean and secure power, but in addition as ‘nuclear for hydrogen’ that would see nuclear power being used as an advanced source of heat to electrolyse hydrogen. This could potentially create a revolutionary new supply of hydrogen fuel.

Heavy goods shipping, long-haul maritime shipping and heavy industrial manufacture are some industries that would most benefit from the deployment of Hydrogen as a power source. 75 per cent of primary energy usage lies outside the power sector and, as such, it is in these industries where hydrogen can play its most important role.

Other recommendations made in the report include:

The report: Maximising COP26 and the pathways to net zero, also provides insight from several countries whose own energy transitions are underway, and from whom the wider international community can learn important lessons.

Maximising COP26 is the result of a series of webinars and roundtables that have been hosted by PPP throughout 2021, chaired by former UK Secretary of State for Energy and Climate Change, COP President Designate, and current Deputy Chair of PPP, Claire Perry. These sessions presented how different countries have been applying new technology to reach net zero and examined how innovation adoption could be scaled globally.

Chris Skidmore, former UK Energy Minister who signed net zero into law and authored the PPP report said: “If we are to meet net zero by 2050, we cannot rely on renewable energy alone, particularly given that most heavy industries that are high emitters of carbon dioxide are unable to be wholly electrified.

Nations cannot shy away from the importance of nuclear power to deliver energy, and should acknowledge how nuclear can be a revolutionary means for producing hydrogen.

Further steps should also be taken on the international stage to commit to reforms of how nations set hydrogen standards so that they can stimulate demand in this key source of clean power. If countries fail to embrace the potential for technologies such as nuclear and hydrogen to deliver emissions reductions, there is a significant risk that the world will never reach net zero by 2050.”

Amber Rudd, former UK Secretary of State for Energy and Climate Change and Deputy Chair of PPP said: “We will only achieve net zero if we bring all countries across the globe together, recognising that every country is starting their journey towards decarbonisation from a different place. So much has already been achieved at COP26, yet the next week will be a crucial phase in the negotiations, when breakthrough moments can still occur. This Public Policy Projects report has been released to demonstrate how we can ‘maximise COP26’ in its final phase – yet only if we work with emerging nations to give them the support and investment that they need to produce their own net zero strategies, and to ensure that they each can deliver a realistic plan with a timetable that can be achieved.

This means not only ensuring that no nation is left behind, but that no technology is left behind also. Key clean sources of power such as nuclear will be instrumental for net zero, and as the report sets out, can potentially open up a new supply of hydrogen for a green revolution.” 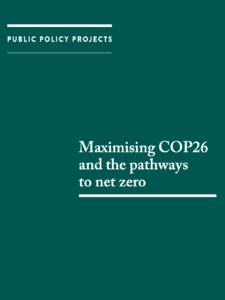 Digital subscriptions Receive our latest insights as soon as they are published and get invited to our exclusive events and webinars.